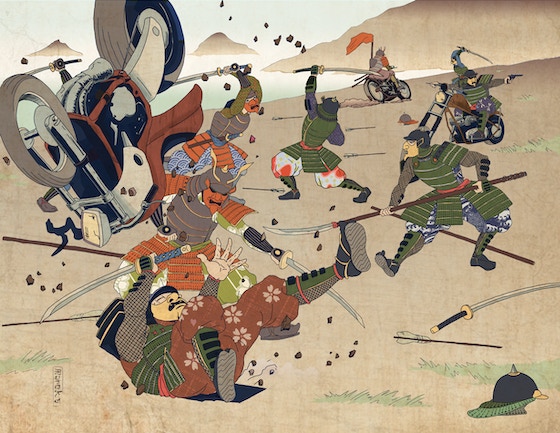 My second Motobushido game was on Sunday morning,  This time I only started out with three players and only had a four hour timeslot.  I cut the First Founding and spent more time on questions/links, and in going over the system.  Initially because of the small number of players I decided to make the Taicho optional, but I got a fourth player late, and added him in as the Taicho.

The plot for the game was that a new leader had arisen in the land and had sworn to wipe the scourge of the Motobushi from the face of the earth.  There had been several major battles between the leader’s forces and the Motobushi, and the Motobushi had lost (again – poor Motobushi).  The remnants of several packs, low on resources, had decided to meet at Three Peaks Cavern VIllage (AKA the small town of Shasta Caverns in Northern California) in an attempt to form some sort of coherent plan to defend themselves.  Among the packs was the PC’s hated rival pack, the War Pigs.

There were some great ties brought in by the players.  One character had killed the Leader’s son here, and had ties to the local daimyo.  One character had sworn to kill the local law keeper for the rape and murder of his sister.  One character’s grandmother lived in town, and was trying to convince him to settle down.  There was a magical shrine to the Kami of 3 Peaks Mountain.  The War Pigs showed up and were acting like belligerent and cocky Motobushi, and their leader even stabbed the law keeper (which caused the character who had a vendetta against him to apply a tourniquet, wait for the law keeper to wake up, then untie it so he could watch the life drain from the man’s eyes.  DRAMA!)  The Taicho eventually dueled the leader of the War Pigs, who was wounded and driven away, and the War Pigs were then given the choice to join the pack or die.  Grandma petitioned the Taicho to let the Gyoja of the pack, her grandson, settle down in Three Peaks Cavern Village and tend the shrine to the local Kami.  There were portents of impending disaster.  Forces of the local Daimyo showed up and were convinced to help defend the town.  Then a huge army of the Leader showed up, along with several packs of Motobushi who had sworn allegience.  The leader himself rode on a huge motorcycle with a throne mounted on the back, driven by (who else?) the former leader of the War Pigs!  The Kusawaki ended the game with a massive duel as she rode headlong into the mass of the leader’s army, eventually crashing her bike into his and killing him (I got an allowance though, so the head of the War Pigs managed to escape).  Though bloodied, the pack survived (except for the Kusawaki).

Though I was running on Sunday morning, I found this game to be less tiring and stressful than the one I ran on Friday.  Three seemed to be just a bit too few Motobushi to really get pack synergy going, but four really boosted the level of interaction a lot.  Based on this and the fact that I found 6 to be too many, my conclusion is that 4-5 is the “sweet spot” for Motobushido participation.

I do not know why I do not own a copy of Roborally.  I really should.  Our friends Mark and Laura picked up a copy at the flea market of the convention and we sat down and played a quick, one board game.

Roborally is one of those games that is at once ridiculously easy to learn and very difficult to master.  In order to be successful you need to be able to bring several skills to bear – the ability to think and plan your moves, since your turn is scripted, the ability to understand the mechanics of what goes when so that you can make use of terrain features and not be killed by them, and the ability to be where your opponents aren’t shooting at you and to convince them to shoot at someone else.  Note however that in Roborally your actual fun may be in inverse proportion to your skill.  Tooling around the board free and easy is great for capturing flags, but much of the fun and humor of the game derives from watching your robot (or someone else’s robot) get lasered, crushed, smashed, or otherwise destroyed in a brutal and horrific way.

we had an hour to kill on Friday evening so I agreed to run a quick game of Omega Zone.  The nice thing about this FATE Accelerated game is that character creation comes down to a few card draws and you are done, so there is plenty of time in an hour to create characters and still run a quick adventure.  In truth I was tired and in that “exhausted yet wacky” end-of-convention space, so I really don’t remember much about the game except that it involved a jelly blob felid, a brain in a tank, and some others trying to stop a K’reen war bot in the shape of a giant Bob’s Big Boy statue from flattening their neighborhood.  Stupid K’reen.

“Bow before your K’reen overlords!”

It was a quick, fun adventure and I think everyone had fun – and if they didn’t, don’t tell me because I want to remember the convention ending on an up note!

So that’s a quick overview of Dragonflight.  It was a great convention.  Thanks to all the hard working staff who made it possible!

I was going to do a review of Duel of Ages II, but Sophie did such a good job that instead I think I will just refer you to her review.  Let me just add a few comments.

First the bad stuff (since Sophie already covers a lot of the good stuff).

Second – good stuff (because otherwise it will sound like I am shitting all over this game, and I actually liked it)

I  think that Duel of Ages II is a worthwhile addition to the game shelf.  If you get a chance to play, do so.  If you are the sort of person who loves to be able to say stuff like “OK, Davy Crockett is going to shoot the dragon with a terawatt laser.” then you probably already own this game, but if you don’t, you should.

Played Duel of Ages II yesterday.  It would be a long and involved post to unpack that game, so I will for the moment just post my semi-official Duel of Ages II card for ME!

Photos of the gaming area we have set up downstairs. I got a chance to play Twilight Struggle recently with my friend SW.  It was the first time I had played a real board game in awhile, and one of the first opportunities I have had to play the newer style of card driven games that seem to have proliforated since I largely absented myself from board gaming.

Twilight Struggle is a simulation of the Cold War.  Players take command of either the United States or the Soviet Union and attempt to extend their spheres of influence across the world stage.  Successful game play seems to revolve around trying to hamper your opponent through staging coups, and expanding your own influence into areas that give you points.  All the while there is a DEFCON track that you need to keep an eye on – get to DEFCON 1 and you blow up the world (and lose).

I’m not going to spend a lot of time describing game play – there are lots of reviews out there on the game – it seems to be very popular at the moment.  Nor am I going to describe the game we played in detail.  Suffice to say that I played the Soviets and SW managed to blow up the world following a Soviet takeover of the Southeast Asia in the late 50’s.

Overall I really liked the game.  It was fast-paced and demanded a good deal of focus and forethought.  A complete campaign game takes around 4 hours to play, which means if you dedicate an evening to it you will get a complete experience and won’t need to leave the game set up somewhere at the mercy of household pets, nearby fault-lines, or your spouse.  Because each turn is a series of back-and-forth card plays between the players, there is never a time when you can zone out, stop paying attention, and just check back in on the game when your opponent is finished.  You need to be on top of what is happening at all times.  The cards (illustrated with period photographs) are all interesting, easy to read, and provide a good historical perspective of the events they represent (the rulebook has a paragraph or two on each card explaining its historical background).

I have tended to shy away from competitive gaming for the last decade or so, being more interested in cooperative board games and RPGs and the like.  But the game with SW really reminded me of how much fun board games can be, and I look forward to trying Twilight Struggle again in the near future.

For a more detailed discussion of Twilight Struggle, see the reviews at Board Game Geeks.